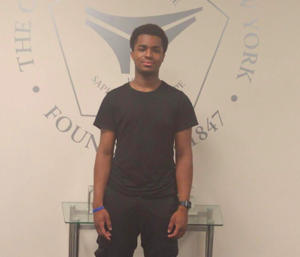 "Asked what is special about YECA, Bernadel mused that it’s many things, but mostly it is the school’s uncompromising commitment to students’ success."
Danielsen Bernadel, 17, recently graduated from the York Early College Academy (YECA) a high school affiliated with York College and located in nearby IS 8. The school enables students to take courses at York College earning up to 60 college credits by the time they graduate. He is graduating with 56 college credits from York and impressive GPA. If the student attends York or another CUNY institution, the credits count toward their baccalaureate degree. Students who attend outside of CUNY will lose some of those credits earned at their school’s affiliated college campus such as York.

But Bernadel felt it was worth sacrificing most of his hard-earned credits to attend Cornell University. The Ivy League college made him an offer he could not refuse: FREE. Cornell will also accept 15 to 16 of Bernadel’s York-earned credits toward his degree. He still hasn’t decided on a major, but he is already talking about going all the way to a PhD.

“In high School I specialized in math and science; but I’m thinking about majoring in English now,” says Bernadel, who is enrolling in Cornell’s summer program for incoming students. “A lot of people are doing STEM now, so I feel I should mix it up and do English.”

Bernadel, the seventh of eight children, grew up in Jamaica, Queens to a single mom who struggled to make ends meet.
“I watched my mom struggle to put food on the table and keep the light on,” said Bernadel, who was also wait-listed at Harvard University before withdrawing his application. “Sometimes she couldn’t. But my older siblings also helped me to stay on the path.”